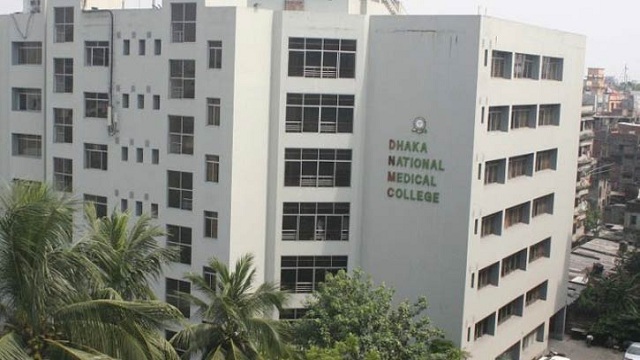 It is known that last August 2 at approximately 2 o'clock in the afternoon, allegations were made against two doctors by tearing the banner poster containing the pictures of Father of the Nation Bangabandhu Sheikh Mujibur Rahman and Prime Minister Sheikh Hasina. Some doctors openly tear down poster banners with photos of Bangabandhu and Prime Minister through aggressive attitude and terrorist activities.

Angered by this incident, Dhaka National Medical College Branch Chhatra League President General Secretary along with general students gathered together and demanded justice from hospital director Dr. Tanveer Arefin. When Dr. Nazmul was called by his administration, he first denied it, later when Senior Ward Master Mohibullah, who was directly involved in the incident, was covered, he frankly admitted the name of Nazmul Arefin in front of the members of the governing body
. There was a photograph of the chairman of the governing body of the hospital and college.
As Dr. Nazmul Arefin Tanveer's heinous injustice was proven, the director of the hospital promised to solve the matter by taking responsibility, and the president of the Chhatra League sent the general students to class. Shortly after that at 2 pm taking advantage of the absence of BSL workers and again instigated by Dr. Nazmul Arefin Tanveer, the intern doctors tore down all the banners of BSL in the college and hospital premises of which all the evidences (pictures and videos) exist.

In this regard, a disciplinary committee was later given the responsibility of judging by the hospital governing body. It is known that this Dr. Nazmul Arefin Tanveer is involved in various unethical activities like tendering of the hospital and there are allegations of looting of money in the name of development of the hospital. Considering the students, the Chhatra League has stopped all its creative activities, apparently placing full faith in the respected members of the hospital governing body and their only demand is that Bangabandhu's ideological organization should not sow any anti-freedom stigma under the flag of the Chhatra League.

When I called Kaushik Dey, president of Dhaka National Medical College Chhatra League, he said, "Those who have done this, they can never hold the ideals of Bangladesh Awami League , so I think they are agents of Jamaat-Shibir, and to implement the agenda of Jamaat-Shibir." They are dressed as  Awami League, I demand exemplary punishment for this incident.

When asked about this, National Medical College Chhatra League General Secretary Shah Tanveer Hasan Nabil said, "I would not have suffered if my personal picture was torn down, the place of my emotions, the last refuge of the Bengali nation, the leader of the country, Sheikh Hasina and the architect of independent Bangladesh, Bangabandhu Sheikh Mujibur Rahman." When the banner festoon with the picture is torn down, I cannot remain silent, I strongly protest against this incident, and demand that these neo-rascals be brought to justice and punished severely.

In this regard, Dhaka National Medical College Hospital Principal Samsul Arefin said, "It has come to my attention, the work has not been done properly, this will be discussed in the meeting tomorrow."

On the other hand, Dhaka National Medical College Hospital Vice Principal Mizanur Rahman Kallol said that these banners and everything else have been removed to maintain the cleanliness of the campus on the instructions of the hospital administration.